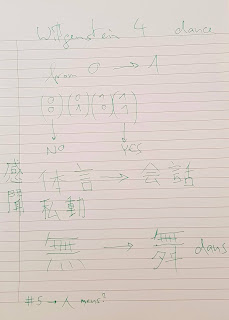 The more I read Wittgenstein, the more I realize he was trying to do something that Semiology (e.g.  de Saussure) were already working on : understand the mechanisms of our cultural patterns and how we (can) use them.


This phase of European Modernism has often been criticized as a result of the (Western) European-dominated colonial era, the meeting with other cultures, and a slow becoming aware of how one's own ways may not be the only ones desirable. Given the wars fought about even 'just' Protestantism, peasant uprisings, around the same time that this imperialist "New Age" had begun, the slowness may seem startling, but just one look at European right-wing (conservative-imitating) populism clearly shows that there is still much to learn, on an ever broader scale of popupations.

About the equations on this paper:

(1
1)  = one over one = meeting, dancing around each other?
possibly into one, yes, existence ...
but also, stagnation